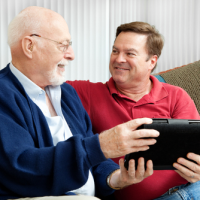 For many, dementia is an all-encompassing term that covers all occurrences of cognitive decline. For those in the medical community, however, there are specific types of dementia that have significant, and sometimes subtle differences. It's important to make the distinction between these different types of dementia because there will be different care recommendations and treatments for each, not to mention different expectations for caregivers and family members. Here are three major types of dementia that account for the majority of diagnoses.

​Before getting to the differences between diagnoses, it's important to understand the commonalities displayed in all dementia types. Memory loss is the most widely known symptom of dementia and is typically the first complaint of patients and their families. In many cases, however, memory loss is confused with other cognitive difficulties. For example, taking longer to process information, shorter attention spans, and difficulties with language can resemble memory loss. These symptoms are often accompanied by confusion around familiar people and places, difficulty with complex tasks orientation issues related to time and place. These cognitive changes are present in all types of dementia, but there are differences within them that help make a specific diagnosis.

​About 60 to 80 percent of all dementia cases are attributed to Alzheimer's Disease. As of 2015, it was the sixth leading cause of the death in the US. Alzheimer's is slow progressing, and typically the first noticeable symptom is memory loss. Over time, impairment of other cognitive functions becomes more significant. Paranoia is also commonly observed in Alzheimer's patients, as well as accusatory behavior of caregivers and even family members. It's important to specifically diagnose Alzheimer's Disease because it's one of the few forms of dementia that responds to treatment with certain medications. The progression of symptoms has been slowed through the use of acetylcholinesterase inhibitors, Rivastigmine, and a multi-receptor antagonist known as memantine.

​Complications relating to blood vessels, most commonly a series of strokes, results in this type of dementia. Historically, Vascular Dementia has been referred to as post-stroke, or post-infarct dementia, but strokes are not the only cause. Lifestyle choices that result in the blockage of vessels can also be to blame, which could include unhealthy diet, lack of exercise, or smoking. Vascular Dementia only accounts for about 10-percent of all dementia cases, but also has the potential for prevention. While memory loss can be a part of Vascular Dementia, it's often other symptoms that present themselves first. This is typically impairment in judgment and reasoning. The treatment and prevention of Vascular Dementia is closely related. Making healthier lifestyle choices has been shown to lower your risk and to slow the rate of cognitive decline.

​This type of dementia combines cognitive changes with problems with movement, which can include walking and stability or the occurrence of tremors. Visual hallucinations are also typically pary of Lewy Body Dementia. While many are not familiar with Lewy Body Dementia, it is the second most common dementia diagnosis in the US. In addition to the symptoms, patients also exhibit more variation than those with other forms of dementia. Alertness and memory can exhibit significant changes in a short amount of time. Again, it's important to diagnose Lewy Body Dementia to ensure the correct treatments are being administered. When prescribing medications, it's important to know that about half of Lewy Body Dementia patients experience worsening cognitive ability, heavy sedation and the possibility of neuroleptic malignant syndrome when treated with antipsychotics. Lewy Body Dementia is also one of the fastest progressing forms of dementia with an average life expectancy of five years after diagnosis.

It's important to understand these different forms of dementia if you have a loved one experiencing cognitive decline, or have a history of dementia in your family. Knowing this information can also help to prevent dementia in some cases.

If you'd like to make plans for your future care, or have a loved one in need of end of life care, contact us at Cura-HPC to learn about our services and the benefits of hospice and palliative care.