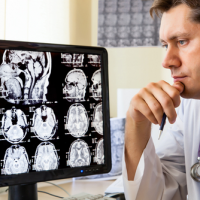 Alzheimer's disease leads to cognitive decline and mental deterioration that significantly impacts an individual's personal life, and health. While there's not currently a cure for Alzheimer's, a great deal of research is being conducted to get closer to finding one. In the meantime, treatment and management of this disease improves greatly when it's caught in its early stages. Recent breakthroughs in testing have allowed for earlier diagnoses. Here are the details of two of these advances.

Also referred to as their full name, biological markers, these genes or molecules represent a tremendous opportunity in Alzheimer's research because of their unique ability to detect when something is wrong within a human system. By studying biomarkers, experts are able to discern when physiological damage or a disease is present within an individual, and can even categorize the specific issue. Biomarker research has concluded that it would be possible to detect Alzheimer's disease in its earliest stages, and potentially before any other type of detection currently available. To date, however, specific biomarkers for Alzheimer's haven't been identified or clinically validated. Research is headed in this direction by studying brain imaging and cerebral spinal fluid protein, while also utilizing genetic risk profiling.

Because of the nature of Alzheimer's disease and its affect on the brain, brain imaging is another promising option for early detection. This would be the MRI, CT, or PET scans that have become common to perform when diagnosing any type of disorder to issue that's related to the brain. As Alzheimer's develops, amyloid plaque begins to build up in the brain, which shows up in brain imaging scans. Amyloid plaque can also be an indication of other disorders. Research seems to be farther along with brain imaging and closer to being able to implement more early detection testing in real world applications. There are even new brain imaging processes in the works that will help doctors identify Alzheimer's specifically without the use of radiation, and at a fraction of the cost of other brain scans. One such technique called arterial spin labeling, or ASL-MRI, requires about 20 additional minutes than a typical MRI, and is able to pinpoint changes in blood flow and increases in blood sugars that would be a symptom of Alzheimer's disease.

Alzheimer's patients are among the individuals we commonly treat under hospice and palliative care at Cura-HPC. To learn more about our care options, contact us at 1-800-797-3839.