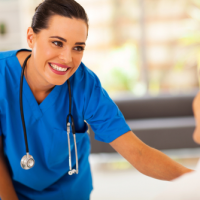 Multiple studies have concluded that patients who enter hospice earlier, and spend more time in hospice care before death experience greater benefits. Now, a recent study has found that palliative care can have similar effects when initiated early in treatment.

A research team at the Center for Psychiatric Oncology & Behavioral Sciences at Massachusetts General Hospital studied a group of patients with advanced lung and gastrointenstinal cancers to determine the effect palliative care had on their quality of life and coping abilities. The conclusion the team made at the end of the study was that early intervention of palliative care improved both of those metrics.

Researchers began by organizing a group of 350 patients, who had recently been diagnosed with cancer. In doing so, they hoped to discover what palliative care administered early in treatment could do, as opposed to starting palliative care well after diagnosis. Randomly, this group was split with half set to receive palliative care, and the other half receiving usual care.

In order to evaluate quality of life and mood, the patients were asked to complete questionnaires at intervals throughout the study. At the outset of the study, at 12 weeks, and at 24 weeks, the Functional Assessment of Cancer Therapy, and the Patient Health Quesionnaire were completed. The Brief COPE was also used in order to measure the patients' acceptance of their diagnosis, and their use of emotional support.

These surveys showed that the group receiving palliative care felt they had a better quality of life and were experiencing less depression by 24 weeks. At the previous two intervals, the two groups were comparable on these two metrics.

The palliative care group also were shown to be more likely to use active and engaging coping methods after 24 weeks of treatment than the group receiving usual care.

Perhaps most interesting, the group in palliative care was more likely to have discussed end of life care options with family members and physicians than the group in usual care. That despite the fact that both groups contained a similar number of patients who considered their cancer unlikely to be cured.

Researchers are confident that even though this study focused on specific types of cancer, the model of introducing palliative care early in treatment would prove to be similarly beneficial to other cancer patients, and likely patients with other illnesses as well.

At Cura-HPC, we provide hospice and palliative care to patients throughout the Tulsa area, and Northeastern Oklahoma. If you have questions about end of life care for yourself or a loved one, we'd love for you to contact us at 800-797-3839.